Today I want to show you a masterpiece titled: “White Peacock and Magnolias” by Irina Zhukova from Minsk, Belarus.

Irina wrote to me:
“Let me introduce myself: my name is Irina and I’m a great fan of needlework. I started with ribbon-embroidery in February 2008. The first masterpieces that I was impressed, fascinated and interested in were yours, Di and Helen Erickson. From that moment I was eagerly looking for information about this form of needlework, and that appeared to be more and more thrilling and exciting to me.

My first ribbons-embroidery works appeared in the fall of 2008 and caused other people’s interest. I began to win prizes in the Internet contests as well as in competitions held among all participants living in different parts of the world. My first solo exhibition took place in my hometown of Minsk, Belarus in September 2009.

In the spring of 2010, I was invited to participate in the Republican of Belarus Exhibition of Hand-embroidery. Later, in May 2010, I won the prize in the Arts and Crafts International Competition, as a part of the International Exhibition “Art Week 2010”. I conducted master classes during those exhibitions, trying to provoke visitors’ interest in ribbons-embroidery. Many of them showed it later, asking for training courses.

At the moment, I continue to learn, create and experiment and recently I was asked to conduct training sessions. Many people wanted to continue learning after them.
Hopefully, my ribbons-embroidery works won’t leave you untouched which is a great honour for me.

Thank you very much, Di, for your fancywork.
Take care and best regards,
С уважением, Ирина.”

Thank you, Irina, for sharing your beauty with us….close up detail follows in the next three photos. 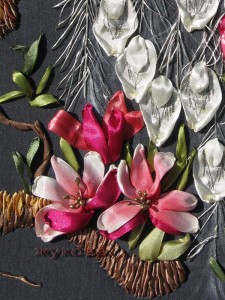 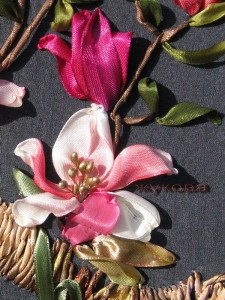 I will add more of Irina’s work in the months to come.

♥ Unlock your creativity with Dicraft!

Di travels internationally to teach and would love to meet you someday!

Please feel free to contact us with any questions.